Twenty-seven years ago I called myself a photographer for the first time. I was attending photography school in Stockholm, Sweden, had won first price in a photo contest, shot a paid gig and participated in my first gallery show.

Two years earlier, in 1990, I was visiting a friend in Los Angeles. I had him chase sea gulls on the beach while I was snapping away, capturing their flight, with my first SLR camera, purchased from my brother.

I remember that as the moment I decided to become a photographer. For real.

I always loved taking pictures but was discouraged by a job coach after high school, intending a photography eduction. “There are no jobs for photographers!” she barked at me. I took her word for it. Years later, one of my photo teachers in Sweden told me about the school in New York he had attended. I remembered reading an article about the same school, ICP. It had felt like a dream that could never happen to me.

I applied, was accepted and in September 1993 I traveled to New York to attend a one-year program at the International Center of Photography. Love kept me in the Big Apple.

1995 I interned at Weil Studio, an art photography studio. It turned out to be a 15 year journey,from working in the darkroom, going through the digital revolution. I earned a position as the director of photography. Together with Amanda Weil, the owner, we designed and produced large art glass installations including photography, working with high end architecture firms.

In 2005 a friend of mine working at the Swedish Church in New York suggested that I list myself on the their website as a photographer and I ended up finding my niche. Wedding portraits in a New York environment of couples coming to NY to get married.
My Mom thinks I have too many kissing pictures on my website...(She also claims that when I was a little boy I told her I'd move to America and that I would send her a ticket to come see me). Funny how life turns out.
My 27 years as a photographer and counting!

I am 53 years old. Home for me is New York City. My family is in 3 different parts of the world, Sweden, Spain and Brooklyn. 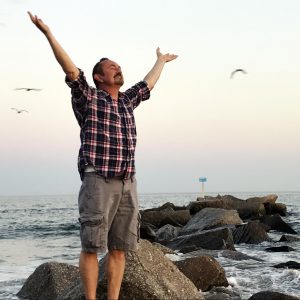 Send me an email for pricing and more information. In Swedish or English!

Photography and design by Michael Skoglund. All rights reserved © 2018